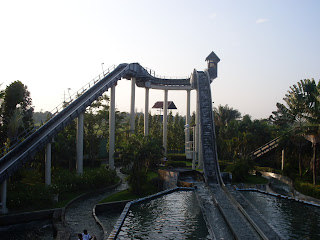 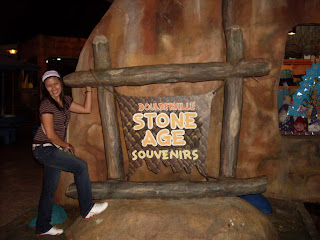 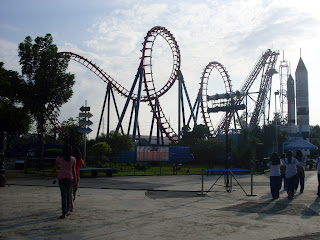 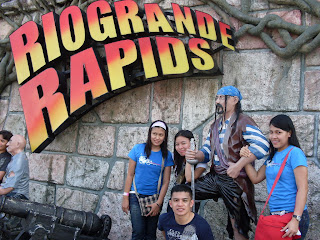 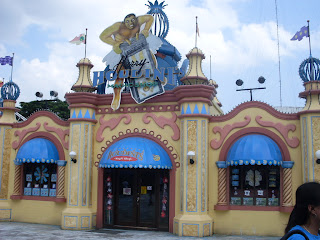 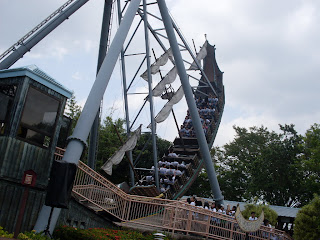 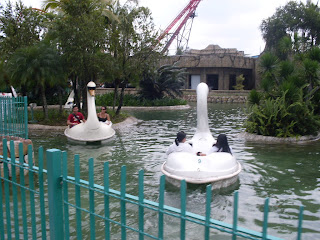 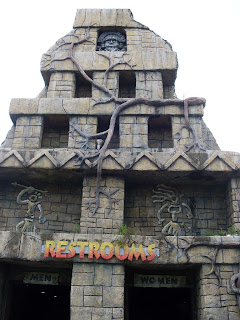 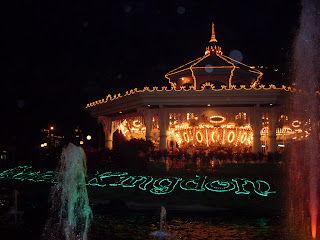 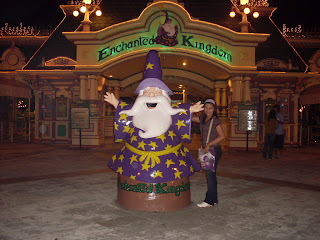 Enchanted Kingdom was located in Sta.Rosa Laguna.It is a theme park in the Philippines which is 29 kilometers away from Manila.The park was first opened on July28, 1995.It was built at a cost of P1.2-billion.The park was modeled after Knotts Berry Farm.

The first time I visited Enchanted Kingdom was year 2002 during our educational field trip tour.The place is fabulous.I took a lot of pictures.I did not appreciate the rides because only carousel was a free ride to us.I just spend time walking with my friends and embrace the beautiful place.

Last year, our team won in the company traditional corporate audit.As a price all members are treat in Enchanted Kingdom free all rides and meal.The Enchanted Kingdom present us a short program to welcome.In the evening, we watched the fabulous fireworks competition.I enjoy all day although I feel scared riding in anchors away.lol.
Posted by Filipina at Tuesday, January 19, 2010 No comments:

In the zoo,I capture few pictures in my mobile. I notice animals look sad.I guess they are hungry or does not like anymore the atmosphere of the place ;-).
I am thinking if there is a budget from the government given to small zoo in areas that take care endangered species of animals.I hope so. 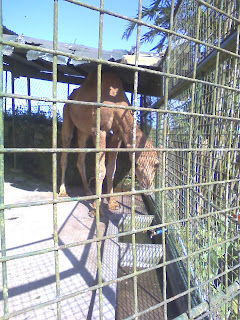 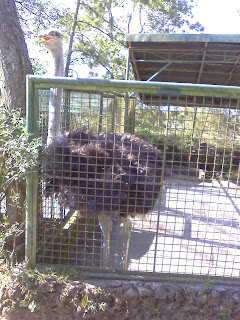 When I see monkey I remember our farm.In the province we have a farm.There is an area that we planted different kinds of banana.Every weekend we visit the farm early in the morning.Mother,father and I noticed a couple of scamp or monkeys playing on the ground.We enjoy looking at them playing.When they saw us they behave and help us clear away dried leaves.
This monkey look sad.We try to play but he only stare with us. 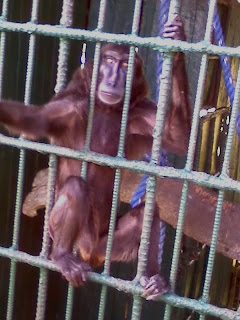 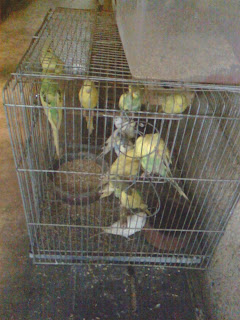 In Tagaytay picnic groove you have an option to unwind yourself either enjoy riding the horse or riding in the zipline.Most of my friends enjoy on the zipline.I get scared riding a zipline especially if it is windy.I try to relax riding a white horse and change my mood looking a nice view of Taal lake.lol. 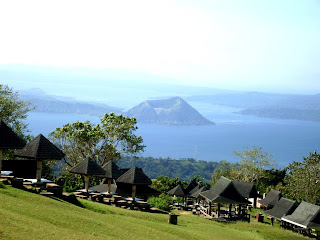 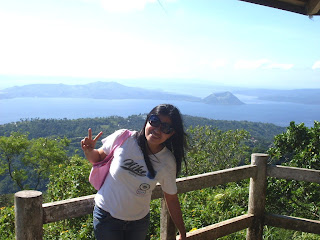 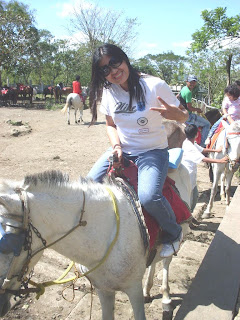 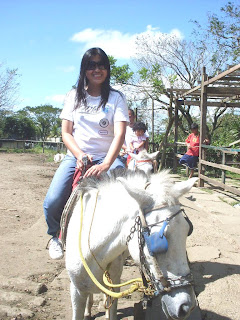 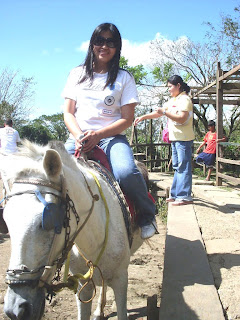 To all bloggers,friends and browser that drop by in my blog I am very grateful that you still browse my post.I was out for a couple months because of my work and studies.I have no time to update my blog even to visit blogs.Lately, I realize that I have to go back in the blogging world.I miss you all guys and gals here! God Bless...and I will do my best to make up visiting your site again.
Posted by Filipina at Sunday, January 17, 2010 No comments: 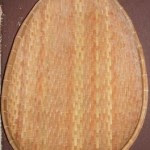 What do you think of this picture? This stuff is from mother. She handed it to me in her first visit in my boarding house.In Biliran Island we call this as "NIGO". This is made from bamboo grass. In my hometown only few people work in a handicraft now .They only make if there is an order .The price of "NIGO" depend its size.The small size cost fifty pesos.What is the use of " NIGO" ? The nigo is used to clean rice .It is used to separate rice hull to its grains since some rice husked is not milled well. I guess only few has "Nigo" in the kitchen :-)Thanks Nanay for giving this to me.I often used "nigo" to clean ricehusked before placing in my rice box .
Posted by Filipina at Sunday, January 17, 2010 No comments:

I wake up early in the morning to attend the orientation of online education in UPOU. I am excited in meting my classmates personally aside from online interactions. I arrived exactly 9 am in the school. There are few students who catch up the last day of enrollment. We are three sat in the chair waiting for instruction. The guy beside me goes to the information to ask the start time of orientation unfortunately orientation was already cancelled. I met one classmate. Her name is Am.She is a dietitian working in St.Lukes Medical. Anyway, it is not a waste of time coming because I met someone.But,I hope next time they gonna inform us immediately. The orientation video site address in you tube was given to us. I just watch online. I also finish my first assignment. Have a blessed Day to all my classmates in PTC program :-)
Posted by Filipina at Sunday, January 17, 2010 No comments:

In the city of Manila there are plenty of shopping malls to visit. The Philippines is one of the nicest country in Asia for vacation. The Filipinos love to unwind in bar and beach resort, but most of the time is in the mall. What are the best malls for shopping? Every Filipinos or even foreigners who visited Philippines were familiar of SM malls.isn't it? The word SM means Shoe Mart which the story originated from shoe making business in late 1960s. There are three SM malls gotten the spot of top ten biggest mall in the world based on its gross lea sable area. This malls is good for shopping because you can find everything you need and unwind yourself too. The top three big SM malls are; SM mall of Asia in Pasay City that is 4.2 million square feet gross lea sable area . It includes first Olympic swimming pool and first IMAX theater in the Philippines. The customers can get around in a twenty seat tram. The other one is SM mega mall in Mandaluyong City. It is 3.6 million square feet gross lea sable area.The last one is SM North Edsa in Quezon City opened last 1985. It is 3 million square feet gross lea sable area. If you are in a trip for vacation do not be missed to visit those malls and have fun! There are various amusement like games ,video okie,bingo and movie.My best past time in the mall is to play bingo games, eat my favorite siomai and video okie.It is very relaxing!
Posted by Filipina at Sunday, January 17, 2010 No comments:

This is a kind of sharing for everybody especially for parents. I am not yet a parent ,but If I see filthy kids on the street my heart melted. I like to post the kid foot which I took in the hospital. The kid footstep is small , but they can walk , run and go away to look someone to play within the yard.isn't it? I visited my friend son in the hospital . The three year old boy admitted in the hospital because he was accidentally hit by the motorbike on the road. I posted a story in Filipina Mixed Blog about the accident. I see that his foot swell. I took a picture while he is still sleeping. After five minutes he woke up. I show him the picture of his foot .I just want to know what is his reaction of the foot picture. He told me "that is my foot". Then he cries. I ask him why you cried? He told me that he has only one foot moving. Then, he moves his foot. He cannot move his other foot because it swell and it is still painful. He needs his mama and papa to help him rise in bed. I get lesson on the kid foot that parents oblige to take care, to prioritize children and give time to them. I admired housewife mommy because they can give full-time to husband most of all to take care and guide of the kid's foot so that they can stand alone easily:-)
Posted by Filipina at Sunday, January 17, 2010 No comments:

It’s been a while that I realize to update my blog.My time was pre occupied in many things aside from that I feel so upset to open my blog site without a single post to read.This newblog suppose to be its two months old now since I am enthusiastic person of bringing into line all my blogpost from my other account I finally lost my post in this site.how? The scenario goes like this I was already finished updating my blog.I kept browsing each post so as my two blog accounts.I noticed that some of my post does not link up the title of my new blog.I decided to move the post to my old account.I use the import and export way of moving my post.I tick the import botton so all my post was transferred to my new account. I just mark the post that does not link up my blog and delete it one at a time.After that, I check my dashboard surprisingly no post was save.I check my library thinking that the post was automatically stored but its post title has an empty content.I feel so bad for treating myself an expert of moving my post.I did not see even a single post save in this new blog.I will be doing updates a lot to make up all those things.The key here is to be careful in using import and export tactic.
Posted by Filipina at Sunday, January 17, 2010 No comments:

The education system change as new technology introduce. Internet is blissful in various ways. Through internet online education is now vogue in learning center and schools. I will share to you an experience in searching a learning center and course in online education. I try my best to enroll in the first semester unfortunately the slot for teaching certificate was already complete. The reason that I did not catch up the enrollment in the first semester is I could not decide what course should I take up. I have two choices either certificate in education or online teaching and learning. The difference between the two is certificate of education has 18 units to comply while online teaching is a 16 week course. What learning center offer this course? It is UP Open University. I seek out another online learning center. There are lots of them that offer teaching online course. It is confusing especially if you read advertising lines. My best option is the learning center that surely guarantee a good teaching strategy, affordable tuition fee, school accreditation and achievements. I finally decided to take certificate in teaching for me to qualify in taking the professional board exam for teachers. I believe that UP Open University strategy in online education could help me a lot. I have already my academic catalogue. I notice that there are different courses offered and most of the students are working abroad. Online education very useful for everybody. Let's use our internet connection in a profitable way continues learning is really valuable.
Posted by Filipina at Sunday, January 17, 2010 No comments:

Filipina
I am not a good writer but I love to share my experience and learning's through writings.I am not confident with my grammar however I wrote it in English to share my page fair to all readers online.I try to make my post simple and easy to understand. God Bless to all readers and bloggers!